A War Widow’s Story of Faith and Survival 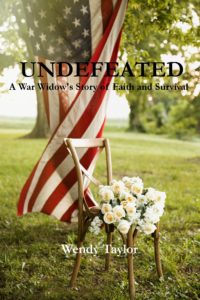 On July 22, 1986, Wendy Taylor became a soldier’s wife. She wasn’t even twenty years old yet, and neither was he. For the next two decades, Wendy remained a soldier’s wife. Through basic training, deployments, and promotions, she was by his side—sometimes physically and sometimes emotionally. Being a soldier’s wife is not easy. Every time he left, she ached for him; but she never imagined the ache would become a permanent fixture in her life.

On January 20, 2007, Wendy Taylor became a soldier’s widow—a part of the Gold Star Family, an exclusive family no one wants to be a part of. Her husband, Michael Taylor, was killed when his Blackhawk helicopter was shot down by the enemy.

This book is her journey of learning how to go on after that. It is an honest—sometimes heartbreaking, but always hopeful—story of survival in the wake of life-changing loss. It is her how to guide on how she remained Undefeated.

To see Wendy on Fox and Friends, click this link. You will be taken to the news network’s write-up and provided with a link to view the video of the interview.